Games
You are here: Home / Games / Carnivores and Herbivores Science Game for Kids
Carnivores and herbivores are both ways of classifying animals by the types of food they eat. This science game activity helps kids practice grouping animals that eat plants versus meat, and those that eat everything – called omnivores. At the end, a child should be able to ask and answer: Are humans carnivores or herbivores?

The difference between the animals by their diet is important because it helps deepen science knowledge of the animal kingdom. Animals have evolved to eat different types of food. This is usually influenced by natural selection and the demands of different environments. By learning about what animals eat, kids also learn about the relationships among different animal species. Here are some ideas for engaging children in this learning activity.Read More
The difference between herbivores and carnivores is particularly important for kids to learn. Herbivores rely on plants for their food, while carnivores depend on meat or the flesh or other organisms. Herbivores have special teeth that rip and grind up plant material. This means that they require an abundance of plants to get the energy they need. The teeth of carnivores such as lions and tigers have evolved to allow them eat the flesh or large animals. Learn about the difference between herbivores and carnivores. Herbivorous animals, like goats, sheep and cows, mainly eat plants. It is important to specify what parts of a plant are eaten. Herbivores such as goats need strong teeth and a large stomach to process leaves and other plant material. An omnivore is an animal that eats both plants and meat. Its diet is wide and diverse, and it will vary from species to species. Basically, humans are omnivores as they eat both plant and animal diets. Some humans, however, choose to eat only plants. They are called vegetarians and vegans, but this is only by choice. Carnivores such as lions and tigers are fierce predators that live in the wild. They are fierce because they have to chase prey to catch and eat them. They eat other animals such as buffalos and wild boars. Read Less 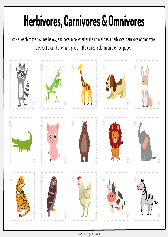 Marine Invertebrates Science Game for Kids - Mollusks, Arthropods and Others

Life Cycle of a Salmon, Science Game for Kids

Parts of a Bird, Science Game Activity for Kids